GGD Galizien German Descendants Thousands, perhaps millions, of people around the world are descended from the German-speaking settlers of the Austro-Hungarian province of Galizien (in English, Galicia; in Polish, Galicja; in Ukrainian, Halychyna)

Search in Gesher Galicia non-profit organization carrying out Jewish genealogical and historical research on Galicia, formerly a province of Austria-Hungary and today divided between southeastern Poland and western Ukraine.

jewishgen.org non-profit organization that provides you with the tools to research their Jewish family history and heritage.

Orchestra of the Janowska Camp in Lvov Jewish musicians were ordered to play a Death Tango during grave-digging and executions. Before liquidating the camp, the S.S. shot all the musicians. 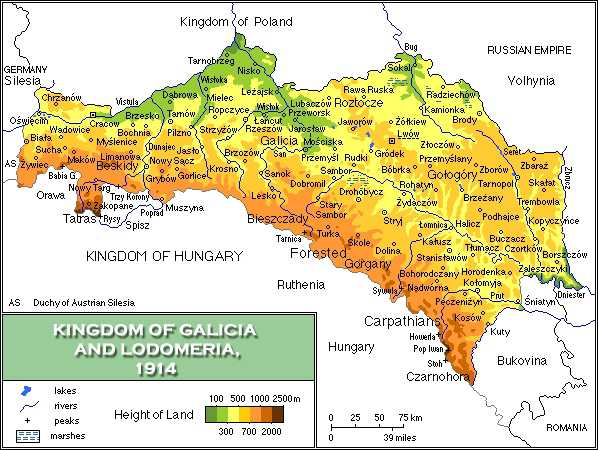 Galicia was formerly northeastern province of the Austro-Hungarian empire. Between WWI and WWII it was the southeastern region of Poland. From 1939 became a part of the Ukrainian Soviet Socialist Republic (part of the USSR). 1941-1944 under German occupation. Today it is western region of Ukraine. Its major cities include Lviv and Ternopil.

Halychyna in Ukrainian, Galicja in Polish, Galizien in German, Galicia in English.

Lviv(Львів) in Ukrainian, Lvov(Львов) in Russian, Lwów in Polish, Lemberg in German

Austrian-Hungarian Imperial civic heraldry for KINGDOM of Galicia
Polish and Austrian Coat of arms for Galicia.

Memoirs by a Galician Ukrainian

Memoirs of a Galician family from Luka

Jewries in Galicia and Bukovina in Lemberg and Czernowitz.